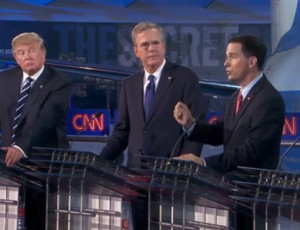 Gov. Walker speaks during the second GOP debate at the Reagan Library.

Interest in Wisconsin Governor Scott Walker’s presidential campaign has bottomed out, according to a new national poll.

Walker was one of five Republican presidential candidates who received less than one-half of 1 percentage point support in the latest CNN/ORC poll. Walker had polled at 5% in the previous such poll earlier this month.

The latest ranking comes in the wake of Walker’s announced intention to redouble his campaign efforts in Iowa, hoping to finish well in the Iowa Caucuses on February 1st.

The survey was conducted September 17-19, just after 23 million viewers witnessed another debate performance in which Walker once again failed to set himself apart from the pack of GOP candidates.

The poll – of a mere 1,006 adult Americans, including 924 registered voters – found that real estate tycoon Donald Trump remains the GOP front-runner with 24% support, although that’s 8 points less than the poll from earlier in the month, when he was at 32%.

Businesswoman Carly Fiorina ranked second with 15% support, a big jump from 3% in early September, and one percentage point ahead of retired neurosurgeon Ben Carson’s 14%. Carson dropped 5 percentage points from the previous poll.

Senator Marco Rubio of Florida was ranked in fourth place with 11% support, up from 3% previously.

Of those surveyed, 444 identified as Republicans or Republican-leaning independents. The margin of error with the Republican results is plus or minus 4.5 percentage points.