You are here: Home / Politics / Govt / Walker expected to drop out of 2016 presidential race 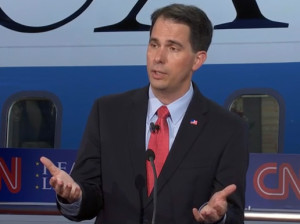 Governor Scott Walker is expected to announce Monday evening that he’s dropping out of the 2016 race for the Republican presidential nomination. According to a report in the New York Times, the Wisconsin governor has determined he “no longer has a path” to win the nomination, and has decided to abandon his campaign.

The move comes just a day after a CNN/ORC poll had the governor with less than 0.5 percent support among Republican voters nationwide, coming in at 11th in the crowded field of candidates seeking the GOP nomination. Walker’s polling numbers have seen a rapid decline in the past month, following a pair of debate performances that saw him struggle to get a word in and attract attention to his campaign.

Walker’s campaign has called a press conference for 5 p.m. at a downtown Madison hotel. WRN will have a reporter at the event, with updates to come this evening.