You are here: Home / News / Walker ready to get back to his ‘day job’ (AUDIO) 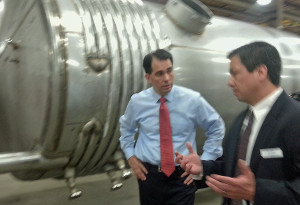 For the first time since abruptly ending his presidential campaign earlier this week, Governor Scott Walker talked to the media on Friday about his plans for the future.

Following a visit at a Beaver Dam manufacturing plant, Walker told reporters that “my focus right now is on being governor. I’ve got the best job in the country, I was happy to go back to my day job and physically be here.”

Physically being here, Walker said, is how he plans to show the people that there’s no job he would rather have right now. “You can say all you want, but the best way to make that case is to be there…to visit schools, and hospitals, and clinics, and small businesses and farmers.”

Walker decline to go into much detail about the reasons why he ended his bid for the GOP presidential nomination on Monday, which came amid rapidly falling poll numbers and reports that his campaign was facing serious financial problems. “My statement about the decision I made to get out of the campaign speaks for itself,” Walker said. “I’m not gonna go back in time and reassess anything else. For me, people want a leader that’s looking forward, not backwards, and I’m looking forward.”

The governor brushed off questions about whether he plans to seek reelection in three years, or whether he would consider a future presidential run. He did make a clear statement that he’s not interested in running for the U.S. Senate in 2018. Walker said all the governors he’s talked to, who went from being governor to the Senate, have told him how miserable they are. “I have no interest in being miserable,” Walker said.

The governor also restated what he told campaign donors earlier this week – he’s not angling for a cabinet-level position if a Republican wins the White House or some other job. “I’m just focused on being governor,” Walker said. “I’ve got three more years left and plenty of things to do.”