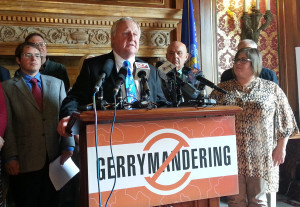 Democratic state lawmakers are once again calling for a change in how Wisconsin does legislative redistricting every ten years.

Currently, data from the decennial U.S. Census is used by the majority party in each chamber to redraw the district lines across the state. Democrats argue the issues with the process came to a head in 2011 when, for the first time in decades, Republicans were in complete control of Wisconsin government. During a Capitol press conference Tuesday to unveil the bill, state Rep. Dave Considine (D-Baraboo) said a recent study of that process resulted in Wisconsin being called “the most gerrymandered state in the country.”

Democrats are reintroducing a bill that would change the way the state draws district lines every decade. Under the proposal, which is similar to legislation introduced last session, the non-partisan Legislative Reference Bureau would draw new legislative and congressional district maps, aided by a Redistricting Advisory Commission. The process is similar to one used in Iowa, which sponsors say has helped create districts that largely follow county lines, instead of the patchwork of curves present on Wisconsin’s maps.

Democrats on Monday maintained that Wisconsin’s current process was abused by the GOP to create districts heavily in their favor, while drawing lines through communities that have typically been represented by a single lawmaker. Rep. Mark Spreitzer (D-Beloit) cited examples from southern Wisconsin, where residents of Beloit suddenly found themselves in two separate districts, while Green County shifted from a single representative to now having three. “People living in the same community, but across the street from each other, have to call different representatives to deal with the same issue…and their voice is diluted,” Spreitzer argued.

Rep. Lisa Subeck (D-Madison) argued that the maps have resulted in Republicans having an unfair majority in the Assembly. She said the 2012 elections saw Assembly Democrats receiving 174,000 more votes statewide than Republican candidates. However, the party returned to the Capitol that session controlling just 39 of the 99 seats in the chamber. She also pointed to the lengthy legal battle that erupted over the 2011 redistricting, in which federal judges called the process “all but shameful” and ordered portions of the map redrawn.

Previous efforts to reform the redistricting process have received little bipartisan support, and this version is likely to face a similar fate. Despite arguments from Democrats that many Wisconsin residents want a less partisan approach, a spokeswoman for Assembly Speaker Robin Vos (R-Rochester) said he does not support making any changes to the redistricting process because “elected officials should continue to make these decisions, not unelected, unaccountable boards.”

The difficult path facing the measure is one that continues to bother some Democrats, who have themselves faced criticism for not acting on reforms when they were in control of state government during the 2008 session. Sen. Dave Hansen (D-Green Bay) admitted Tuesday that “something should have been done…and that was a mistake, and that’s a pox on our party and a pox on any party that doesn’t do the right thing.”