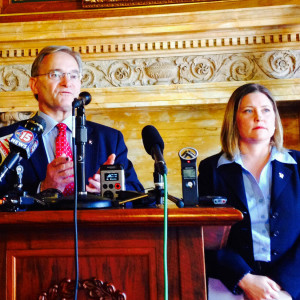 During a press conference at the Capitol on Tuesday, Lassa said WEDC’s myriad problems cannot be fixed. “It’s brand is damaged beyond repair, and its credibility has been compromised to the point where internal reform efforts are no longer sufficient.” WEDC, formed in 2011 shortly after the election of Governor Scott Walker, is a public private partnership which has been dogged by bad loans, high turnover and unfavorable audits.

Barca and Lassa’s proposed legislation would put most economic development efforts back under state control, unlike the public private partnership of WEDC. “We envision a transition period, we envision involving regional economic development experts, current board members, past commerce secretaries, and others who have important input to help us get this right,” Barca said. “We’re introducing this just as a bill to start the discussion. We don’t have any illusion that the Republicans will pass this as-is, by any stretch of the imagination. But I think we need a new conversation.”