The state Department of Natural Resources is letting property owners know that they don’t have to give up their lawn ornaments.

The agency has been fielding several questions about a letter circulating on social media, which advises citizens to remove concrete deer from their property by November 1 due to concerns that they may interfere with a statewide count of the deer population

DNR spokesman Jim Dick says it is a hoax and that agency staff “do not go around looking at concrete deer and thinking they are the real thing.”

The message, printed on DNR letter head, does appear convincing. However, Dick notes there are a number of flaws that stand out, such as the fact that it lists Deputy DNR Secretary Kurt Thiede as the head of the agency. It also misspells his name and is not signed.

Dick insists that lawn ornaments, even if they resemble wildlife, can remain in place. 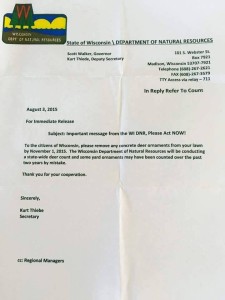