You are here: Home / News / Wisconsin Eagle license plate is a big seller 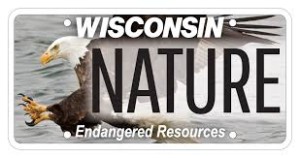 One of Wisconsin’s newest specialized license plates is flying off the shelves. The new endangered resources plate featuring an eagle is already very popular after just over a month. Owen Boyle is the Acting Director of the Department of Natural Resources’ Natural Heritage Conservation program. He said sales of Wisconsin’s new eagle design license plate are on pace to exceed the first year performance of its two predecessor Endangered Resources plates, including the wolf plate.

“We’re very happy with the pre-sale, and now, September 1st, our regular sales were up to over 300 plates sold already in the first month,” Boyle said. More than 42o eagle plates have been issued. In the first year of the badger design, 1,800 plates were sold and 1,400 wolf plates were sold in that design’s first year.

The special license plates do cost more, and the money raised goes to conservation efforts. “When you purchase an endangered resources plate, either the new eagle design or the older wolf plate design, $25 dollars a year goes towards the Endangered Resources Fund, which is used to conserve any non-game species here in the State of Wisconsin,” Boyle explained. Many of the new license plate owners are sending photos to the DNR Facebook page, where they become eligible for a special promotion.