You are here: Home / Business / Wisconsin Lt. Governor heading to Japan and Taiwan 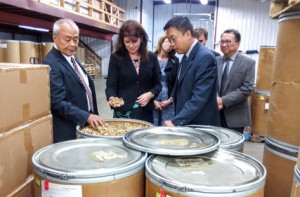 Paul Hsu, Lieutenant Governor Rebecca Kleefisch and Will Hsu inspect a delivery of ginseng during a visit to Hsu’s Ginseng in Wausau (Photo: Raymond Neupert)

Wisconsin’s lieutenant governor is gearing up for a trade mission to Taiwan and Japan later this month.

Lt. Governor Rebecca Kleefisch was in Wausau Thursday to promote the eight day trip, where she will join a delegation from the Wisconsin Economic Development Corporation. Speaking at Hsu’s Ginseng, she said they plan to focus on a number of industries while in the two countries. “Things like biomedical, things like energy and power and controls. We see huge growth potential for those, as well as food and beverage. Obviously ginseng is a food of which we are very very proud, and I think we’re going to do some really good business when we hit both Japan and Taiwan.”

Hsu’s Ginseng owner Paul Hsu is from Taiwan. He offered Kleefisch some gifts of ginseng and other products to take with her while she conducts meetings other delegates.

Hsu’s already has a firm hold in the specialty ginseng market in China and Taiwan, and is prized for its quality and potency. Kleefisch says they’re hoping to expand that market into Japan as well. “So this is a great opportunity for us to continue to promote the Wisconsin Brand, which we know is very high value, high quality, in all pretty much East Asian minds.”

Kleefisch also addressed the decline in the number of farmers growing ginseng and the decline in Wisconsin’s family farms. She said upcoming additions to a program to reduce tax burdens on farmers will help bring people back to the industry. “In 2016, we’ll see a full phase in of that. We’ll take tax liability for our growers down to nearly nothing. That makes this industry even more attractive for people.”

The state is also moving to help promote agricultural education in schools alongside the other core courses of science, technology, engineering and math.

In addition to attracting new companies to Wisconsin, WEDC hopes to help solidify their trade agreements with the 29 Japanese and three Taiwanese companies that already have a presence and operation in the state.