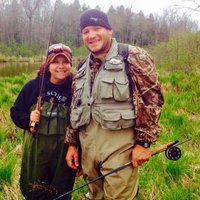 A desperate plea is being made from a Gillett woman, asking for the public’s help to find her husband. Bruce Windorski, an Army veteran and former Menominee Tribal Police Officer, is one of several Americans who traveled to Syria earlier this year on his own to fight ISIS.

He returned home several months ago, but now he’s gone again, without a trace, which is what has Courtney Windorski concerned.

Saturday morning, the Wisconsin Department of Justice put out an alert, saying Windorski suffers from post-traumatic stress disorder, and hasn’t been taking his medications. He drives a gray 2003 Dodge Durango truck with Menominee Nation plate A9658.

Courtney says Bruce was supposedly going to a veterans meeting near Wisconsin Rapids a week ago. When the outdoorsman didn’t come home, she contacted another veteran.

“He had not seen or heard from him and he said there wasn’t a meeting this past weekend,” she said. Courtney says Bruce has been “struggling with demons” stemming from the death of his brother Philip Windorski. He was killed when his helicopter was shot down in Iraq in 2009.

Bruce’s unannounced trip overseas to Iraq – and then Syria – earlier this year was an attempt to find closure. Married nearly five years ago, the couple has three children from previous relationships and a four-year-old daughter together.

Courtney says cell phone activity pinpointed Bruce in Ozark County, in southern Missouri last Sunday. Since then, nothing. Authorities say, if you see Windorski or spot his vehicle, to contact Gillett Police at (920) 855-2125 – or to call 911.