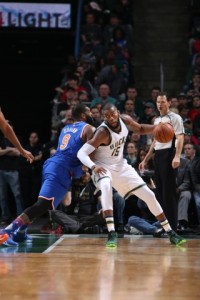 Derrick Williams scored 24 points and 20-year-old Kristaps Porzingis had 16 points in his NBA debut, leading the New York Knicks to a 122-97 win over the Milwaukee Bucks in Wednesday nights season opener at the BMO Harris Bradley Center.

The Knicks pulled away with a 15-0 run between the first and second quarters.

New York won just 17 games a year ago but outhustled the Bucks in the season opener.

The Bucks get a day to watch film and make corrections before hosting the Washington Wizards on Friday night.