You are here: Home / Sports / Bucks open their season tonight 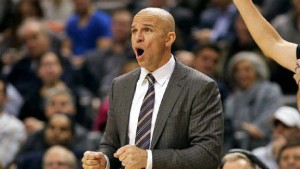 The Milwaukee Bucks won 41 regular season games a year ago, a 26-game improvement from the previous season.  So the natural question is what kind of improvement will this young team have in store for their fans this season?

Last season, the Bucks lost their top pick Jabari Parker 25-games into the season.  Parker won’t play tonight when the Bucks open up against the New York Knicks at the Bradley Center, but he is expected to make his debut sometime in early November.

The Bucks have made improvements in the offseason, signing free agent center Greg Monroe.  They also added forward Chris Copeland and guard Greivis Vasquez, both of whom should allow the Bucks to improve their three-point shooting.

Bucks coach Jason Kidd is hoping to see improvement from his team on offense, without sacrificing the outstanding defense they played a year ago.

They ranked 22nd in the NBA out of 30 teams in scoring, averaging just under 98 points a game.

What the Bucks won’t be able to do this season is sneak up on teams.  The rest of the league now knows this is a young, talented team that is on the rise.  A 26-game improvement will be considered much easier to attain, then the next step the Bucks hope to take.

Going from 41 wins to 50 wins, only a 9-game improvement from last year, will be much more difficult to attain, despite the new additions and overall improvement of the team.

But the next step will be to go from a team that made the playoffs to a team that is looking to secure home court advantage in the first round.  They’re trying to climb into the area of obtaining a four-seed and that will be easier said than done.

The Bucks will continue to improve and grow.  If they stay healthy, who knows what the next level will be.  Certainly, we don’t expect the Bucks to go backwards, but going from 41 wins to somewhere between 46-to-50 wins would be a big accomplishment.

The Bucks, as a very young team last season, were careless with the basketball and turnover totals were often high.  It’s an area Jason Kidd will expect to see his team improve on this season.