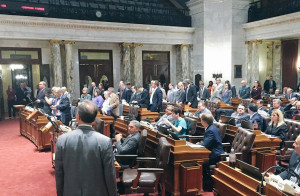 Democrats stand on the Assembly floor to indicate their recusal from voting. (Photo: Office of Rep. Peter Barca)

The state Assembly has approved controversial changes to the state’s campaign finance laws, with Democrats refusing to vote on the measure.

Assembly Speaker Robin Vos (R-Rochester) said the changes deal largely with issues raised in multiple court cases, which include clarifying in state law that candidates for office can coordinate with outside issue advocacy groups. The bill also doubles contribution limits to candidates and clarifies limits on corporate contributions to political parties and committees.

Democrats railed against the measure, arguing that the changes stand to open Wisconsin elections to a flood of outside spending. Rep. Gordon Hintz (D-Oshkosh) noted that no other state allows candidates to coordinate with outside groups, and that the change only benefits candidates, not the public. “If you spent as much time actually governing, and working to improve opportunity in people’s lives, as you do consolidating power in our state, maybe things in Wisconsin would not be so bad.”

The bill passed Wednesday night 61-0, with all Democrats in the chamber recusing themselves from the vote. Members stood up one by one to state their decision not to vote was due to concern that they believe the bill could directly impact their campaign committee and that they could have a substantial financial interest in the matter.

The bill now heads to the Senate, where its future remains uncertain. Republicans in the chamber have indicated changes are likely, but have not said what they may be.