You are here: Home / Military / Efforts continue to identify remains of Wisconsin airmen and others 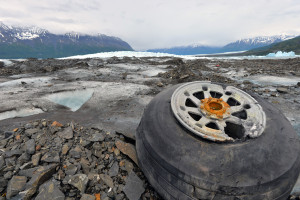 The wreckage site of the C-124 Globemaster is only accessible by helicopter for about two weeks a year, in June. (Photo: U.S. Air Force photos/Tech. Sgt. John S. Gordinier John S. Gordinier)

Efforts continue to identify the remains of dozens of airmen who died more than 60 years ago when their plane crashed in Alaska. Believed to be among the dead are three men with ties to Wisconsin, whose remains have yet to be identified.

More than 50 people were on board the C-124 Globemaster when it crashed into Mount Gannett in Alaska on November 22, 1952. The wreckage of the Korean War-era military plane and the remains of its passengers were lost until they were spotted in 2012, some 16 kilometers from the crash site. They had been carried their by the Colony Glacier. The site of the wreckage is only accessible two weeks out of the year in June.

Officials have been working on identifying the remains since then, recently confirming those belonging to aptain Walter Perrin Tribble of Champaign, Illinois, and Airman 2nd Class Bernis F. White of Fordyce, Arkansas. Their families will be offered burial will full military honors.

The three Wisconsin men on that plane were Airman 2nd Class Thomas Condon was from Waukesha, Airman 2nd Class Dan McMann was from Marinette, and Airman 2nd Class Edward Miller was from Evansville. Remains from 17 other men were identified and returned to families last year, making 19 in all that have been afforded a chance at a proper burial. Tribble’s and White’s remains were among those recovered in June, 2014.

Efforts continue to identify other remains found at the same time, but Armed Forces Medical Examiner Colonel Ladd Tremaine said it could be several more weeks before additional identifications are released. “There are some other cases that are extremely complex that deal with multiple fragments, and those are the ones that we’re really having trouble with – linking samples back to specimens,” said Tremaine.

Tremaine’s agency received the remains in August after a jurisdictional change caused them to be handed over from the Defense POW/MIA Accounting Agency. “We’ve actively been working these since getting them in August and it’s going to take probably a few more weeks to get a couple of them out,” said Tremaine.

Remains recovered in June of this year are also undergoing an identification process.