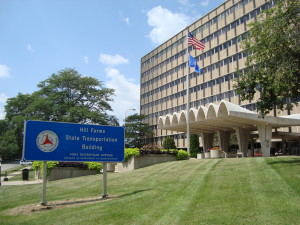 “I will be supporting this project despite some initial concerns about it, because I do think it’s better than what’s there currently,” said state Representative Chris Taylor (D-Madison). Taylor said the current building sits on “totally underutilized” property. As for the building itself: “It is a total eyesore. It is so darned ugly. This building is just horrible looking.”

State Representative Dean Knudson (R-Hudson) was also a yes vote – reluctantly. He expressed concerns about growing government, despite Republicans’ best efforts to prevent that. “I think it will stand as a 9 story testament to the simple fact that no matter how hard we try, government tends to grow,” Knudson said.

The new building will house the Department of Transportation’s central office, and other state agencies, with completion scheduled for early 2018. “For me it’s kind of bittersweet to see that building go,” said state Senator Jon Erpenbach (D-Waunakee), one of generations of drivers to get a license at Hill Farms. “I’m really happy we’re moving foreword with this.”