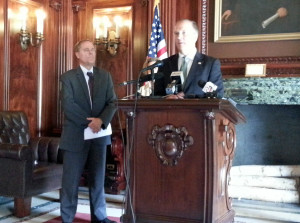 A package of bill unveiled at the Capitol on Tuesday would make it easier prosecutors and investigators in Wisconsin to crackdown on child abusers, while also opening up more resources for victims of abuse and neglect.

The legislative package from Sen. Rob Cowles (R-Allouez) targets what he said are growing problems with child abuse, neglect, and sexual assault. The Allouez Republican said during a Capitol news conference that “with these bills, we hope we can strive to give kids a violence-free and safe childhood, and deter acts of abuse, neglect and sexual assault in our communities. We all hope that these bills can be a voice of change and bring the criminals preying on children to justice.

One of the bills would give victims of sexual assault, human trafficking or child abuse the right to have a victim advocate accompany them during examinations and interviews with police. Another bill would require social service agencies to report any instances of child abuse or neglect to police. The remaining two would make repeated acts of physical abuse to a child or child neglect formal crimes.

Attorney General Brad Schimel said the proposals will enable prosecutors and law enforcement to do the best they can to keep children safe. “We have no higher responsibility in government than to protect our children,” Schimel said.