You are here: Home / News / Liberal group at odds with Walker administration over records request (AUDIO) 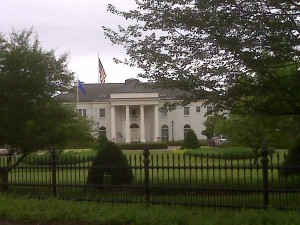 A liberal advocacy group is raising questions about the release of records detailing who visited Wisconsin’s executive residence in the months leading up to Governor Scott Walker launching his presidential bid.

One Wisconsin Now asked the governor’s office for logs of who visited the mansion in Maple Bluff, after Governor Scott Walker won re-election last November. They were given partial records this week, with logs showing visits to the residence starting in April of this year. However, OWN executive director Scot Ross said information about visitors from November through early April was not included, and the Walker administration is claiming they do not exist. “I think it’s extraordinary to say…that the governor’s mansion does not retain a record of who comes in and out of the mansion,” Ross said.

AUDIO: OWN director Scot Ross responds to the missing records (1:34)

An attorney for the Walker administration said in a letter stating that the records are considered “transitory,” so they state is not required to retain them. Counsel Elisabeth Winterhack said that “Capitol Police has no need or legal obligation to keep each day’s sheet,” and that the records the administration did provide were what Capitol Police “happened to have kept.”

The claim drew a skeptical response from one open records advocate. Bill Lueders, president of the Wisconsin Freedom of Information Council, said it was “hard to see” how that category could be used to classify the visitors logs, considering state officials are required to maintain records for at least three years of calendars, schedules, diaries and meeting logs used to document meetings and appointments, which are then turned over to the Wisconsin Historical Society. Lueders said “it looks to me as though the DOA went looking for a category of records that doesn’t require retention and decided to say the visitors log fell into this category, instead of in the category that deals explicitly with logs.”

Ross said OWN will consider its legal options. “We’re incredibly skeptical and are going to review the law and explore any and all legal actions,” Ross said.

OWN requested the records to see how soon political aides tied to Walker’s eventual presidential campaign started visiting the residence, after he won re-election last November. The logs that were released show several visits starting in April of this year, which Walker’s office has noted was a perfectly legal use of the property.

Spokeswoman Jocelyn Webster said Wednesday that “the Governor is free to have campaign staff visit the residence for meetings or other personal purposes, as he would in his own home. As you may be aware, Wisconsin law specifically prohibits fundraising for political causes in state buildings, and the Governor’s use of the residence complies with this and all other applicable state laws.”