You are here: Home / Badgers / Pankowski named WCHA Offensive Player of the Week 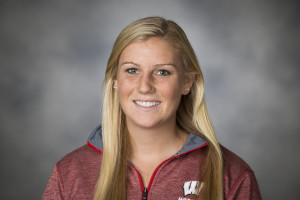 Following a five-point weekend in her home state of California, Wisconsin women’s hockey sophomore Annie Pankowski was named the WCHA Offensive Player of the Week.

Pankowski scored the Badgers’ first goal in their 5-1 win over Providence on Friday at Sharks Ice in San Jose, California.  She then tied a career high with four points in UW’s 8-1 triumph over Providence on Saturday with a hat trick and an assist.  Two of Pankowski’s goals on Saturday were shorthanded tallies, making her the third player in program history to score two shorthanded goals in a single game.

The third-ranked Badgers open their home slate on Saturday with a 2 p.m. contest at LaBahn Arena against WCHA foe Ohio State.