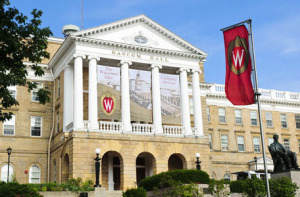 The Board of Regents of the University of Wisconsin System has approved a plan to lift UW-Madison’s cap on out-of-state students. UW System President Ray Cross told the Regents on Friday that the state’s flagship university faces a demographic reality – a declining pool of Wisconsin high school graduates to choose from.

“The number high school graduates, which peaked at about 71,000 in 2009, is now down to almost 64,000,” Cross said. “We’re requesting a four year waiver on the out-of-state cap.” The waiver would kick in for the fall of 2016. Cross and UW Madison Chancellor Rebecca Blank pledged to enroll at least 3,600 in-state students in each UW Madison freshman class. This year there are 3,617.

Cross noted that UW Madison competes with other top-flight universities, in attracting qualified high school graduates. “We are losing too many really good, talented students to other states . . . because they are being recruited to go elsewhere,” Cross said. “We can’t afford to lose that talent.”

“In the face of declining high school numbers, we can’t just be doing business as usual,” Blank said. With the state also facing a declining working-age population, Blank said they’ll also focus on keeping UW grads in Wisconsin. “If our first commitment is to Wisconsin students, our second commitment a partnership with Wisconsin businesses to try to attract more of the students who graduate from our institution to stay in Wisconsin.”

“If the number of Wisconsin residents is staying the same, arguing that this proposal will help us attract more talented Wisconsin residents is not sufficient,” said a statement Madison Laning, Chair of Associated Students of Madison. “It is clear that this proposal was put together by a small group of people, who were rushed, in order to fill short term budget holes in our university.”