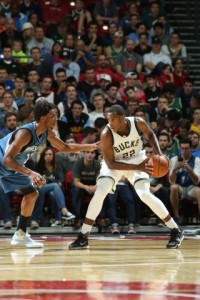 The Milwaukee Bucks used a third-quarter surge to beat the Minnesota Timberwolves 106-88 in front of a spirited crowd at the Kohl Center in Madison.

Michael Carter-Williams sparked a 17-to-four run in a third quarter in which the Bucks out-scored the Timberwolves 35-17.

Shabazz Muhammed led the Timberwolves with 18 points off the bench.

The Bucks shot 51% from the field and held Minnesota to 33%.

The Bucks overcame early foul trouble and 15 turnovers in the first half but still finished with 24 turnovers for the game.  They improved to 2-3 in the preseason, with one final exhibition game left, Friday night at Minnesota.

The Bucks open the regular season next Wednesday against the New York Knicks at the Bradley Center.