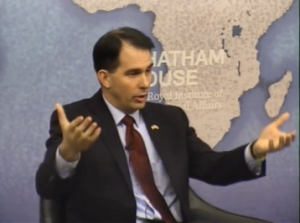 Governor Scott Walker’s administration has released cost estimates for his security detail and trade missions he took earlier this year while exploring his now-ended presidential run.

The figures, released late Friday afternoon in response to open records requests from multiple media agencies, show the state spent about $125,000 on security for Governor Walker during the first half of the year. Walker’s political organization, Our American Revival, and campaign have reimbursed the state for $58,000 so far, and have indicated they plan to cover the remaining balance.

Wisconsin governors have historically been provided around the clock protection by the State Patrol, with security levels based on the discretion of the agency. Taxpayers will still cover the cost of the salary and benefits of those agents, but groups connected to Walker agreed earlier this year to cover other travel expenses during periods when the governor was traveling for political purposes.

The Department of Administration has not yet released figures detailing Walker’s security costs after he formally announced his presidential campaign in early July. The governor spent much of his time out of the state campaigning after launching his presidential bid. He dropped out of the race for the Republican nomination last month.

Also on Friday, the Wisconsin Economic Development Corporation released figures detailing expenses related to Walker’s travel to Western Europe and Canada earlier this year. According to WEDC, the state spent $29,470 on the Canada trip and $117,300 on the European Union trade mission. Both trips came in under what the agency had budgeted for their totals costs.