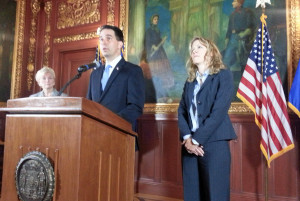 Governor Scott Walker has named Judge Rebecca Bradley to fill a vacancy on the state Supreme Court. The move, which was widely expected, will set her up as an incumbent justice on the high court as she runs for the open seat next spring.

Bradley, who currently serves as an appeals court judge, will serve out the remainder of Justice N. Patrick Crooks’ term, which is set to end next July. Crooks died unexpectedly last month, just weeks after announcing he planned to retire at the end of his current term. Bradley said she was “deeply honored and humbled” by the opportunity to fill out the rest of his term.

While Bradley is already running for the seat, Walker said Friday that it was not the main factor in his decision to appoint her. “I wanted to make sure that I put the best person on the bench,” the governor told reporters at a news conference announcing his decision.

Appeals Court Judge JoAnne Kloppenburg and Milwaukee Circuit Judge Joe Donald are also running for the seat, but did not apply for an appointment to the seat. In separate statements, both criticized the governor for his decision to appoint Bradley. Donald said that “by appointing Rebecca Bradley to the Circuit Court, to the Court of Appeals, and now to the Supreme Court, Governor Scott Walker has now elevated a loyal ally three times in four years, including twice in the last year. This abbreviated process simply cannot withstand public scrutiny.”

Bradley downplayed any advantage her appointment might give her next spring, saying it is “ultimately the voters’ decision who they want to serve for a full ten year term.”