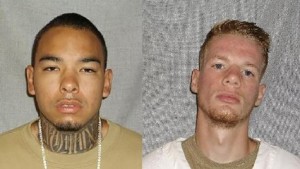 One of two men who escaped from the Winnebago Correctional Center last week has been arrested in Green Bay. Police say 21-year-old Austin Reynolds was taken into custody Wednesday. The search continues for 21-year-old Leland Larock.

Reynolds and Larock escaped a fenced yard at the Oshkosh facility sometime between 6:15 p.m. and 9:30 p.m. last Friday, according to the Oshkosh Police Department.

Larock is described as Native American, 5’6″ and 146 pounds. He has black hair and brown eyes. Oneida Police say Larock has connections to the Oneida and Menominee area. Anyone with information on the whereabouts of Larock, please call law enforcement immediately.