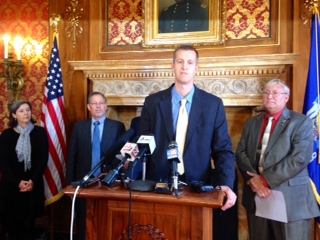 A group of lawmakers in Madison are making a bipartisan effort to update state compensation for those wrongfully convicted of crimes in Wisconsin. Governor Scott Walker said those amounts are “quite low” and need to be corrected. The state’s current compensation levels for those exonerated of crimes are $5,000 annually, with a cap of $25,000.

“There’s no way we could ever compensate someone for the loss of a year of their life by being incarcerated and wrongly convicted, but have to make a good faith effort in this state, and we are doing that by this bill,” said Representative Gary Hebl (D-Sun Prairie). Hebl, along with Representative Dale Kooyenga (R-Brookfield) and Senators Van Wanggaard (R-Racine) and Fred Risser (D-Madison) on Thursday announced their plan to begin circulating their legislation.

“Wisconsin used to be a national leader when it came to doing justice for those who were wrongly convicted, when it adopted its compensation statute many decades ago,” said Professor Keith Findley of the UW Innocence Project. “It has now fallen to dead last.”

“This bill puts Wisconsin’s wrongful conviction compensation on par with many other states,” as well as the federal standard, Wanggaard said. Kooyenga said the lawmakers don’t want to give the impression that they are “delivering justice” with the legislation. “There’s no amount of money that we can give these individuals that delivers justice.”

“If someone’s wrongfully convicted, I think it’s an obligation of society to see that they’re adequately compensated for that.” Governor Walker said during a stop in DePere on Thursday.