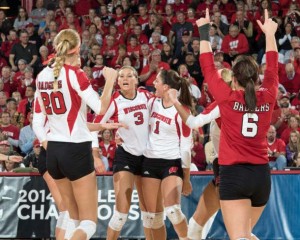 The 16th ranked Wisconsin women’s volleyball team stunned 3rd ranked Nebraska, upsetting the Huskers in four sets in Lincoln, Nebraska.  It is the first time Wisconsin has ever beaten Nebraska on the road.

The Badgers improved to 14-6 overall and 6-4 in the Big Ten.  Wisconsin recorded a season-high 15 blocks, while powerhouse Nebraska recorded just eight.

Wisconsin returns home this week to face 19th ranked Purdue on Friday night at 7 p.m. at the U.W. Field House.  The match will air on BTN.