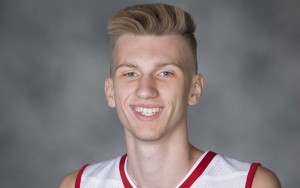 Wisconsin freshman Andy Van Vliet has been ruled ineligible for the 2015-16 season after the NCAA denied the school’s appeal seeking his reinstatement.  The NCAA ruled Nov. 4 the Belgium native was ineligible, but Wisconsin filed a waiver citing “factors outside of Van Vliet’s control.’  The school received word Tuesday that appeal had been denied.  Van Vliet, a 6’11 freshman, was expected to add depth to a Badgers front line that lost Frank Kaminsky, Sam Dekker and Duje Dukan from a squad that reached last year’s national championship game.  The school said NCAA rules allow student-athletes one year to enroll in college following their high school graduation or expected graduation date.  But the 20-year-old played as an amateur outside that window.  In addition to sitting out this season, he will only have three years of eligibility remaining.