You are here: Home / Badgers / Badgers fall to Georgetown in 2K Classic 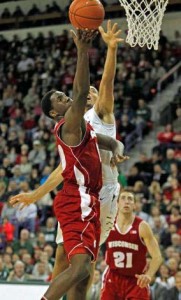 Georgetown connected on 9 of 18 from three-point range to pull out their first win of the season, 71-61 over the Wisconsin Badgers in the semifinals of the 2K Classic at Madison Square Garden in New York..

The game was a rematch from last November when Wisconsin came from nine-points down in the second half to knock off the Hoyas 68-65 in the semifinals of the Battle 4 Atlantis in the Bahamas.

The Badgers fell to 2-2 and will face V-C-U in the consolation game on Sunday.  Virginia Commonwealth fell to Duke 79-71 in the other semifinal.