You are here: Home / Crime / Courts / Beloit woman arrested in connection with hit-and-run of child 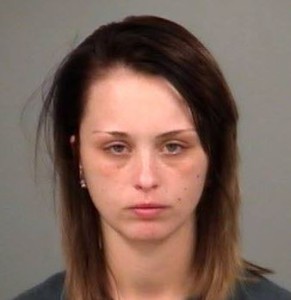 A Beloit woman has been arrested in connection with a hit and run crash last week involving a child on a bicycle.

Surveillance video of the incident last Tuesday morning shows a blue car hit a child in a crosswalk, and then continue driving.  The child was treated for minor injuries at a local hospital and released.

The department posted the video on social media, resulting in over 155,000 hits. Police Captain Dan Molland said in a statement that “it’s because of those social media views we received numerous tips and information that allowed our officers to an arrest.

Beloit Police say around 11:00 Sunday morning an off-duty officer observed a vehicle similar to the one in the video. Officers stopped the vehicle driven by 24-year-old Amber D. Mayfield of Beloit. The officer also found damaged to the vehicle that was consistent with the accident.

Police say Mayfield admitted to being involved in the accident, and she was placed under arrest for hit and run causing injury. Her vehicle was seized as evidence.

The case has been referred to the Rock County district attorney.