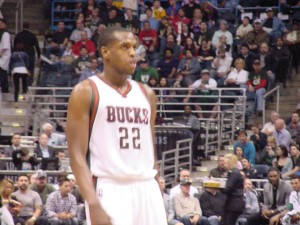 Khris Middleton and Greg Monroe scored Milwaukee’s final eleven points last night and the Bucks rallied for a 91-87 win over the Philadelphia 76ers at the Bradley Center.

Jabari Parker made his return to the lineup, back for the first time since tearing the anterior cruciate ligament in his left knee last December.

Parker finished with two points and four rebounds in 16 minutes of playing time.

After Philadelphia committed a turnover, Middleton drained a three to put the Bucks up four with 48.4 seconds left to help seal it.

The 76ers first round draft pick Jahlil Okafor had 21 points on 9 of 13 shooting from the field, but Philadelphia dropped to 0-4 on the season.

The Bucks played without Michael Carter-Williams (ankle).  It isn’t certain if he’ll be able to play on Friday when the Bucks face the Knicks in New York City.