You are here: Home / Packers / Favre among Hall of Fame semifinalists 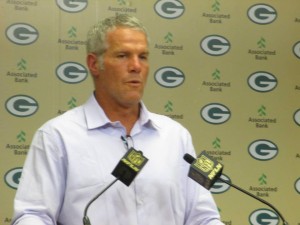 Former Green Bay Packers quarterback Brett Favre has been named one of 25 semifinalists for the Pro Football Hall of Fame in his first year of eligibility.

The three-time MVP retired with 508 touchdown passes, 71,838 passing yards and 186 NFL victories.  Following 16 seasons with the Packers, he finished up with a year in New York (Jets) and two years with the Minnesota Vikings.

Favre was originally drafted by the Atlanta Falcons before being  traded to the Packers.

Former Packers outside linebackers coach Kevin Greene was a finalist last for the 2015 Hall of Fame Induction and is a semifinalist again this year.