You are here: Home / Legislature / Finance committee to vote on full $350 million for transportation bonding 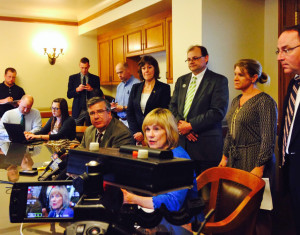 The Legislature’s budget committee will vote Wednesday on borrowing $350 million to pay for road construction projects over the next two years.

“That is the motion that is out there,” said Joint Finance Committee co-chair, state Representative John Nygren (D-Marinette) on Tuesday. Although, he cautioned “we have to have discussions with our members before I can say definitely that is what’s going to happen.”

The move would combined the total amount authorized under the state budget over a two-year period, removing the need to hold a second vote later in the biennium. Governor Scott Walker has been pushing for just the released of $200 million in bonding to keep projects going.

With several Senate Republicans against the borrowing, Democratic votes will be needed to approve it when the finance committee meets. “The feedback I’ve gotten, we don’t necessarily have unanimity yet, but I think we’re getting to a good place with them,” Nygren said.