You are here: Home / Sports / Green Bay’s Love is Horizon League men’s Player of the Week 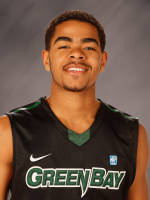 The Milwaukee native shot 9-of-17 from the field, including six-of-nine three-pointers in the game.  The six three-pointers were a career high.  His 32 points tied for the third-most in the NCAA on opening night and were the most by a Horizon League player in the opening weekend.

The Player of the Week honor is the second of Love’s career.