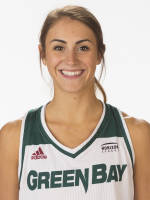 Green Bay Phoenix senior Kaili Lukan has been named the Horizon League Player of the Week.

Lukan led Green Bay with 22 points in last Friday’s 75-55 season opening victory over the Marquette Golden Eagles.  Lukan also pulled down ten rebounds in the win, notching the second double-double of her career.

Lukan hit 8-of-17 from the field and three-of-five from beyond the arc.

Lukan’s performance helped Green Bay to its 900th program victory, a milestone that no other division one team in the state of Wisconsin has reached.

The Phoenix women return to the court this Saturday at the Kress Events Center to face Vanderbilt (1 p.m. tipoff).