You are here: Home / Sports / Henson powers Bucks to victory 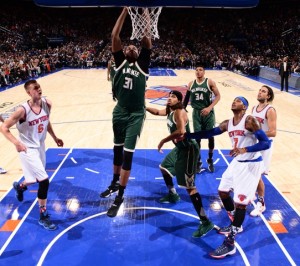 John Henson dunks on the Knicks. Photo: Courtesy of the Milwaukee Bucks

Not only did John Henson return to the lineup after missing time with an injury, he was a force in the Milwaukee Bucks 99-92 victory over the New York Knicks at Madison Square Garden on Friday night.

Henson had 22 points, five rebounds and three blocks in his return after missing four games with a sore left Achilles.  Giannis Antetokounmpo added 20 points and seven rebounds while holding New York’s Carmelo Anthony to 17 points on 6 of 16 shooting.

The Bucks went on an eleven-to-two run in the fourth quarter and Henson scored seven points during that stretch.

The Bucks are back home tonight to host the Brooklyn Nets at the Bradley Center.