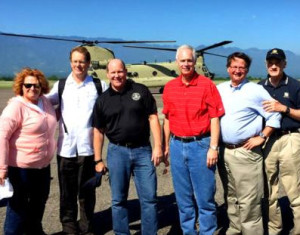 U.S. Senator Ron Johnson says members of a Senate committee he chairs have concluded that Americans’ “insatiable demand for drugs” is driving insecurity on the U.S. southern border. The Wisconsin Republican is just back from a trip to the Central American nations of Guatemala and Honduras where he said he witnessed firsthand the havoc wrecked by drug cartels.

“We’ve pretty well concluded in our committee, and this is I think bipartisan, that the root cause of our unsecure border is literally our insatiable demand for drugs, which has given rise to the drug cartels” Johnson said. “They’re businesses, so they’ve expanded their product lines from trafficking drugs to trafficking humans, to sex trafficking, to using illegal immigrants as a diversion to their drug trafficking. Those drug cartels have destabilized the governments of Central America. That’s kind of the witches brew that we’ve created here.”

“Honduras and Guatemala are beautiful countries, and their people are beautiful. And they actually do want to make their countries stable and secure so they can stay there,” Johnson said. “So from my standpoint, we’ve to help facilitate that. And one of the things we’ve got to do is work to address our drug demand problem in this country.” Johnson said cocaine continues to account for the majority of the illegal drug trade out of Central America.

While in Guatemala, Johnson visited a shelter for “little girls who were victims of sex trafficking,” and said they are clearly victims of the drug trade. “Drug use is not a victimless crime. You are using a drug that’s being trafficked, and there’s all kinds of depredations occurring because of that traffic.”

Johnson was joined on last weekend’s trip by Senators Tom Carper (D-DE), Heidi Heitkamp (D-ND) and Gary Peters (D-MI), and 8th District U.S. Representative Reid Ribble (R-WI). The trip came as Johnson prepares to release a new report on U.S. border security. It’s the result of a series of hearings and other meetings conducted by the Committee on Homeland Security and Governmental Affairs, chaired by Johnson.