You are here: Home / Sports / Kimberly’s Mulholland is State Player of the Year 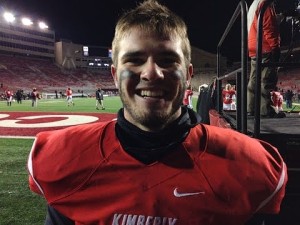 Kimberly running back Blair Mulholland has been named the Wisconsin Associated Press High School football Player of the Year.

Mulholland, who has orally committed to South Dakota State, led the state in rushing with 2,971 yards on 310 carries and 47 touchdowns.

Bangor head coach Rick Muellenberg is the State Coach of the Year.

Muellenberg led Bangor to the Division 7 State Title, downing Pepin/Alma 20-14.  Bangor has made 13 playoff appearances since 2000.