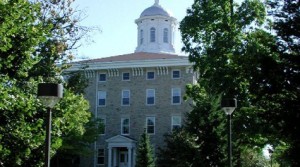 Main Hall on the Lawrence University campus in Appleton.

Minority students at Lawrence University have submitted a three-page letter to school President Mark Burstein, listing demands and concerns over issues of race, hatred and bigotry on campus. The letter, delivered earlier this week, states students of color on the LU campus “will respond with civil disobedience, protests, and other means if these demands are not met within a timely manner.”

“Many, if not most, of the issues that are identified in the document are things that students have expressed before and that we know need continued work,” says Nancy Truesdell, vice president for student affairs at Lawrence. “These are really serious and important issues so I’m glad that they found a voice to be able to express themselves.”

The 14 demands and 21 concerns listed include discriminatory policies and faculty incidents against students of color. It also involves off-campus incidents of racism along College Avenue in the city of Appleton.

“This is not the first that we have heard about expressions of the experiences that students have,” says Truesdell. “The reports, typically, have been someone driving by in a vehicle shouting things out of windows, it’s very hard to get a description or who to hold accountable.”

Truesdell says Lawrence administrators have been working with the city of Appleton’s Diversity Coordinator along with the mayor’s office to address these concerns.

“They are negatively affected by the way the university presented itself as far as the opportunities they’ve had to feel welcome and inclusive on campus,” says Varughese, who’s a senior majoring in government and Spanish. “I would say that students of color on campus have felt this for quite a few years actually, going all the way back to the Civil Rights Movement.”

Varughese says those students of color felt motivated after watching the actions at the University of Missouri to express those feelings to the school’s administration.

“Because of those events it has renewed passion in making sure what they believe in is clear on this campus and they can share it with the administration,” Varughese says.

Varughese adds that he expects the administration to respond with a plan, however he admits some of the problems may take years to fix.

IS LAWRENCE AN “INCLUSIVE” CAMPUS?

The College Board indicates that 71 percent of students at Lawrence University are white.

Based upon the demands and concerns referenced in this list, including naming specific faculty members and the concern about them the group wants investigated, is this Liberal Arts college not tolerant and inclusive??

“I think every individual on the campus would have their own answer to that question,” replied Truesdell.

Varughese believed that much of it is.

“There are marginalized groups on campus that don’t feel safe and don’t feel as welcome as we all might,” said Varughese. “And I think that’s because of the different backgrounds and different walks of life.”

With the last day of classes Thursday, and fall semester finals right after, Truesdell says that senior staff at Lawrence will use the next month to look at immediate changes and forming an action plan. That’s expected to be introduced in January when students return to campus.