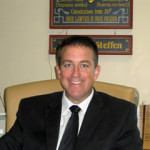 The Polk County District Attorney is facing OWI and speeding charges, from a traffic stop in Fond du Lac County. Sheriff’s Captain Rick Olig said a deputy stopped Daniel Steffen on Highway 23 near the Sheboygan County line. Steffen was driving was traveling at 70 miles an hour in a 55 mile an hour zone.

Olig said the deputy determined that Steffen had been consuming alcohol. “He was cooperative during the arrest, consented to the (breathalyzer) test. There were no real issues with it. He was driving a Polk County vehicle at the time.” Steffen allegedly blew a .11 blood alcohol content. Olig said the DA had two passengers at the time of his arrest Monday night. He was on his way to a conference in Elkhart Lake and the passengers were victim witness coordinators.

Since it was his first OWI, Steffen was released to a responsible party. He’s scheduled to appear in court on December 7th.

Steffen was first elected as Polk County District Attorney in 2006 and is currently in his third term. According to a brief biography at the Polk County website, the county has “created and implemented numerous programs to combat crime and create a safer and stronger county,” during Steffen’s tenure, including an OWI Prevention Committee.