You are here: Home / News / Rodgers upset with fan during pregame tribute (Audio) 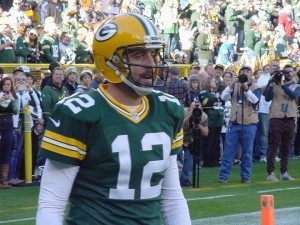 Every NFL Stadium, including Lambeau Field, paid tribute to those who lost their lives in terrorist attacks in France last week with a moment of silence before Sunday’s games.

But Green Bay Packers quarterback Aaron Rodgers wasn’t happy when a fan shouted out a slur against Muslims during the moment of silence in Green Bay.

Rodgers called out the fan during his post game press conference.

The Packers quarterback wouldn’t elaborate on what he heard the fan say but he clearly wasn’t happy about it.