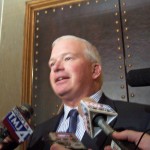 Efforts by leaders in the Republican-controlled Wisconsin legislature – to pass a pair of controversial measures to rewrite campaign finance statutes and dismantle the non-partisan Government Accountability Board – appear to be unraveling in the state Senate.

A spokeswoman for Majority Leader Scott Fitzgerald (R-Juneau) said Monday that the Senate has cancelled a scheduled Tuesday floor session, although members are being told to keep their schedules open for the duration of the week. The legislature’s fall session ends on Thursday. The Assembly passed its versions of the contentious GAB (SB 294) and campaign finance (SB 292) bills last month.

“I think they’re hearing from their constituents,” said Jay Heck with Common Cause in Wisconsin. “Certain Republican Senators are very uncomfortable with the idea of doing nothing this fall other than enacting legislation that benefits them.”