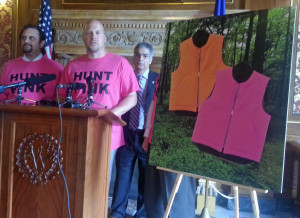 Hunters who head out in the woods in Wisconsin could soon be donning bright pink to stay safe.

Legislation approved in the state Assembly on Tuesday would add “blaze pink” to the list of approved colors that must make up at least half of each article of clothing above the waist that hunters wear, instead of just current blaze orange. Rep. Joel Kleefisch (R-Oconomowoc), a co-sponsor of the bill, has noted that women make up the fastest growing segment of new hunters in the state, and the bill could create new options for them when looking for clothing to wear.

The Oconomowoc Republican said he’s under no illusions about women flocking to hunting because of blaze pink being a color that’s allowed, but believes giving hunters options is “a great thing” that should be encouraged.

Kleefisch also noted that a University of Wisconsin textile expert determined blaze pink could be even more visible to other hunters than blaze orange, while actually being harder for deer to see. “I think that pink will be considered an option by many people who are hunting, who would like to be seen by other hunters, but not by the deer.”

The measure passed on a voice vote without debate and now heads to the state Senate.