You are here: Home / News / Wisconsin Capitol Christmas tree to come from Rhinelander 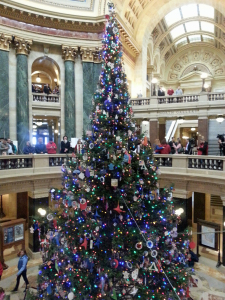 This year’s state Capitol Christmas tree will be a 40-foot balsam fir from Rhinelander.

Governor Scott Walker’s office announced Thursday that Brad and Elizabeth Kowieski, along with their family, donated the tree, which was planted by Brad on Arbor Day in 1985.

The tree, a yearly fixture during the holiday in the Capitol rotunda, will be decorated this year with ornaments highlighting Wisconsin sports. The governor’s office is asking students in public and private schools across the state to create ornaments along that them, which will be hung on the tree when it is placed in the Capitol after Thanksgiving.