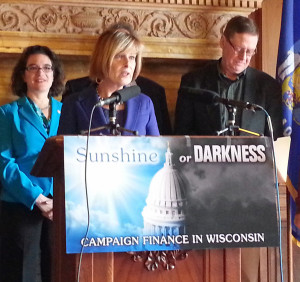 A Madison Democrat wants to take a different approach to dealing with campaign finance reform in Wisconsin.

The proposed legislation from state Representative Terese Berceau (D-Madison) seeks to addresses many of the concerns Democrats have raised about a campaign finance reform bill the Assembly is expected to vote on next week. The Republican-backed legislation has drawn fire from Democrats and government watchdog groups, who argue it will make it harder to track who is funding elections in Wisconsin

Berceau’s bill, unveiled Friday at the Capitol, would require more disclosure of who is paying for advertising during campaign season, place limits on donations to political parties and issue advocacy groups, and maintain a requirement that donors list their employer when making a contribution. She argued that her proposal would “shed light on who is funding campaigns…if we are not afraid of that light, this is what we will do.”

The state Assembly is expected to take up the Republican campaign finance bill on Monday, with members voting to approve changes made in the state Senate earlier this month. It is expected to pass, sending the proposal to Governor Scott Walker for his consideration.