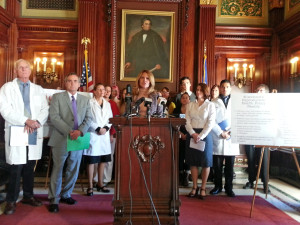 Legislative Democrats are proposing a bill they say will keep politics from influencing doctor-patient relationships.

Dubbed the “Patients Reproductive Health Care Act,” the legislation seeks to wipe out controversial laws enacted in recent years that Democrats argue are intended to restrict access to reproductive health care for women, including abortions. Those include a requirement that abortion doctors have admitting privileges at nearby hospitals, which is currently blocked by a federal court ruling.

The measure also seeks to end requirements that doctors discuss what the authors call “junk science” with their patients and offers stronger penalties for those who harass or intimidate patients and doctors.

State Sen. Jon Erpenbach (D-Middleton), a sponsor of the bill, said the goal is “to ensure that all patients in Wisconsin have access to comprehensive, evidence-based health care.”

The legislation also seeks to give doctors the right to offer a full slate of reproductive health services, including abortions, at any facility where maternal health care is offered, even if it’s a private religious hospital. Erpenbach said that’s needed to due to the high number of health care mergers in the state. “You have providers merging with providers…so the ability for a woman to get comprehensive health care is limited, depending on where you happen to live in the state.”

The legislation is unlikely to see much movement in the Republican-controlled Legislature.