You are here: Home / Legislature / Wisconsin Republicans say ‘no’ to Syrian refugees 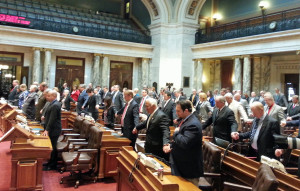 Members of the WI Assembly honor the victims of terrorist attacks in France. (Photo: Andrew Beckett)

Members of the Wisconsin state Assembly stood together briefly Monday, to honor those killed last Friday night during a series of terrorist attacks in Paris, France. Lawmakers held hands across the aisle during a moment of silence and as the French national anthem played in the chamber, then sang the national anthem of the United States.

Meanwhile, news that one of the terrorists responsible for last week’s attacks may have entered Europe as a refugee from Syria prompted a new wave of backlash from Republicans in Wisconsin and nationally.

Governor Scott Walker joined a growing list of Republican governors nationwide who voiced strong opposition to allowing Syrian refugees to be settled in their states. In a statement, Walker said he believes plans to admit another 10,000 refugees into the US from Syria poses a threat. “With this in mind, I am calling upon the President to immediately suspend the program pending a full review of its security and acceptance procedures.  The State of Wisconsin will not accept new Syrian refugees,” Walker said.

Assembly Republicans also weighed in on the issue, with 47 members signing on to a letter to the federal government asking that Wisconsin not be considered as a location for resettling any Syrian refugees. “It is not a time to open our doors to individuals who may pose a security risk or instill an unnerving sense of fear in our citizens.”

Despite their strongly worded statement, Assembly Speaker Vos (R-Rochester) did acknowledge the state may have a difficult time actually keeping refugees out of the state, since immigration issues are handled at the federal level. “I don’t think we can pass a bill that says we are going to ban refugees from being here in Wisconsin,” Vos said. “But, we certainly think it’s ill-advsed at this time.”