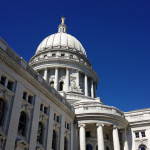 The state Senate worked into the early morning hours Saturday to pass a pair of controversial Republican-authored bills. Senators voted shorty before midnight Friday to pass a major rewrite to campaign finance law in Wisconsin, and passed a measure to dismantle the Government Accountability Board some two-and-a half hours later.

Majority Leader, Senator Scott Fitzgerald (R-Juneau) dismissed concerns about “outside money” influencing elections under the rewritten campaign finance statutes. “No matter what rhetoric you hear about corporations to be involved in some of these elections, the bill maintains Wisconsin’s ban on corporate contributions to candidates,” Fitzgerald said early in debate over the measure. Senators debated for more than four hours as minority Democrats proposed numerous amendments.

The Senate was meeting in extraordinary session to pass the campaign finance bill and a second measure, which would drastically overhaul the state’s elections and ethics agency. The Assembly passed both bills last month. The changes deal largely with issues raised in multiple court cases. “Forty years of court cases have left scattered pieces of not only the state’s unenforceable current law, but also a political process that needs to be navigated, and is completely foreign to anyone who wants to enter into the political arena,” said Fitzgerald. “We have to change this set of statutes.

A GOP-authored amendment would require many donors to still disclose their employer when giving to political campaigns – a requirement a version of the bill approved by the state Assembly last month eliminated. The bill doubles contribution limits to candidates and clarifies limits on corporate contributions to political parties and committees.

Minority Leader, Senator Jennifer Shilling (D-La Crosse), warned that third-party groups will drown out candidates for office. “We will become the small fish in this big pond, and there’s going to be a bigger fish always. Always a bigger fish out there, with more money to drown our message,” Shilling said. The also said that there was little support for the bill among voters. “Folks are not buying what you’re selling on this stuff.”

Fitzgerald said the bill “draws a bright line” between campaigns and issue advocacy groups – an assertion that Democrats challenged. “We as candidates can’t take corporate money, but there’s not an all out ban on corporate money because there isn’t disclosure,” said Senator Jon Erpenbach (D-Middleton.)

The bill (AB 387) passed just before midnight on a 17-15 vote. Senator Rob Cowles (R-Green Bay) joined Democrats in voting no. The bill will need to be concurred in by the Assembly before going to Governor Scott Walker for his signature.

The GAB bill would create ethics and elections commissions with partisan appointees. Republican Senators amended the Assembly passed version of that measure as well, creating a transition time frame from the GAB to the new commissions, and adding two retired judges to the ethics panel.