You are here: Home / News / 2015 in review: Governor Scott Walker runs for president 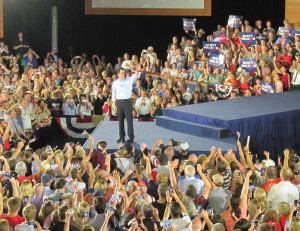 From pretty much the moment he was sworn in to begin his second term in office last January, Governor Scott Walker’s presidential ambitions were the subject of massive speculation. Walker would build on that anticipation for months, before eventually launching his short-lived bid over the summer.

Just days into the year, Walker fueled speculation of a run when news broke that he had hired seasoned Republican strategist Rick Wiley as a political advisor. Walker downplayed the move at the time, saying he Wiley’s role was to aid him in navigating the many offers he was receiving for help in launching a campaign. The governor also said he would be seeking guidance from above, since “any major decision I’ve made in my life, politics of otherwise, I’ve tried to discern God’s calling on.”

That calling led Walker to travel the world in the following as he explored his possible presidential bid. He made headlines towards the end of January with a fiery speech to Republicans in Iowa. Walker touted his accomplishments in Wisconsin during his four years in office and his vision of reducing government dependency. “The measure of success in government is not how many people are dependent on government – the measure of success in government is how many people are no longer dependent on the government,” Walker said to an eager conservative crowd.

Walker also drew some criticism during his time on the campaign trail, such as refusing to answer a question about evolution during a stop at London’s Chatham House. He frequently chose to “punt” on similar issues in the months ahead, as he stormed out to an early lead in the polls in Iowa.

Despite an early showing as a frontrunner in the race, Walker held firm on a promise not to make a decision until after the state budget was done. Just days after signing it in July, he called supporters to a rally in Waukesha where he announced his campaign. “After a great deal of thought and a whole lot of prayer, we are proud to announce that we am officially running to serve as your President of the United States of America,” the governor told a crowd of about 5,000 supporters.

Walker remained near the top of the polls until August, after a weak performance at a presidential debate showed him struggling to be noticed in the crowded field. He started losing ground to a surging Donald Trump and Ben Carson and, by early September, he had fallen to just under three-percent support in Iowa. The second major GOP debate did not see Walker fairing much better, with most of his more memorable comments coming during attacks on Donald Trump.

The governor has remained relatively quiet about why his campaign ended so abruptly, but money troubles played a major role in its demise. The campaign had been struggling to raise funds since he started slipping in the polls, which was compounded by excessive spending on operations he likely could not keep up through the Iowa Caucuses early next year.

Walker was back in the public eye less than a week after ending his campaign, pledging to get out and start talking to the people of Wisconsin again. An upbeat governor told reporters at a stop in Beaver Dam “my focus right now is on being governor. I’ve got the best job in the country, I was happy to go back to my day job and physically be here.”