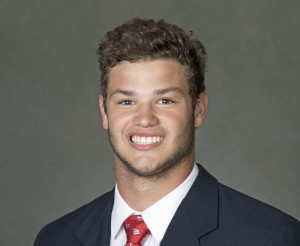 The Defensive MVP honors went to linebacker Jack Cichy.  He had to sit out the first half because of a targeting penalty in Wisconsin’s final regular season game.  Cichy was dominant when he finally hit the field.

Cichy recorded three sacks in one half, on back-to-back-to-back plays in the third quarter against the Trojans.  He also had nine tackles, in just one half of football.

Joel Stave finished 18 of 27 for 217 yards and a touchdown to earn Offensive MVP honors.  The victory was the 31st with Stave as the starting quarterback, which broke the program record of 30, set by Brooks Bollinger from 1999 through 2002.

Corey Clement returned to the Badger lineup and rushed for 66 yards on 19 carries with a touchdown.  He left the game in the third quarter with a left ankle injury.

Cody Kessler finished 18 of 32 for 221 yards with a touchdown and an interception for the Trojans.  The Badger defense held Kessler under his passing average of 255 yards per game.

After the game, Wisconsin junior linebacker Vince Biegel, who had been considering leaving early for the NFL, announced that he would be returning for his senior season in Madison.