You are here: Home / Badgers / Biegel says Big Ten honor is a slap in the face 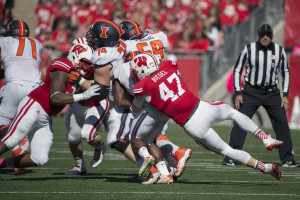 Biegel’s statistics are similar to those of teammate Joe Schobert who was named the Big Ten’s top linebacker.

Like Schobert, Biegel played a big role in helping Wisconsin finish the regular season ranked number-one in the nation in scoring defense, allowing an average of 13.1 points a game.

Biegel is still evaluating whether to enter the 2016 NFL draft or return to Wisconsin for his final season.  He expects to announce his plans right around the time the Badgers face USC in the December 30th Holiday Bowl.  For now, his focus is on that game as the Badgers are  tasked with holding down the nations 30th ranked scoring offense (34.9 ppg).

AUDIO: Dave Aranda says Biegel and others can use their post season awards as motivation :13