You are here: Home / Sports / Bucks play to the end, pull out win 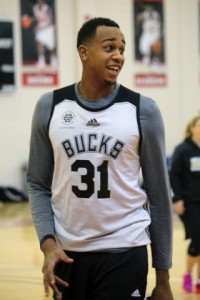 The Milwaukee Bucks trailed by four points with 22 seconds left, but they didn’t quit.

Portland has one chance to tie it or win it, but Meyers Leonard’s short jump shot was blocked by center John Henson.  Carter-Williams made one of two free throws after being fouled and the Bucks held on for a 90-88 victory, their second straight.

Giannis Antetokounmp led the Bucks with 17 points while Greg Monroe added 16 points and 12 rebounds.  O.J. Mayo added 15 points, with eleven of the 15 in the fourth quarter.

Portland (9-13) struggled to make shots in the first half and went one for 15 from three point range.  The Trailblazers started to heat up in the second half and made it a close game the rest of the way.

Damian Lillard had 23 points to lead the Trail Blazers.

Today is a practice day for the Bucks, who will host the Los Angeles Clippers on Wednesday night.

AUDIO: John Henson on his block of Meyers Leonard :10