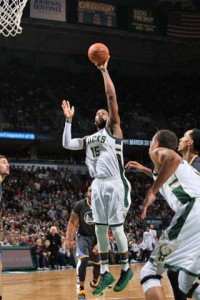 The NBA’s longest winning streak was 33 by the Los Angeles Lakers in 1971-72, and it was also snapped by the Bucks.

Stephen Curry had 28 points on 10-of-21 shooting from the field.  He was just two-of-eight from three-point range.  Draymond Green added 24 points and 11 rebounds for Golden State.

The road-wiery Warriors were playing the 7th road game on their 7-game road trip.  It showed in their shooting.  Golden State hit just 2 of 13 from three-point range in the first half and six-of-26 for the game.

The Bucks head West to face the Los Angeles Lakers on Tuesday night.

AUDIO: Greg Monroe says they have to build on this :16